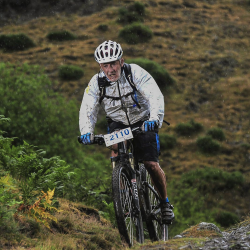 Back in the 1960’s was selected twice to represent Glasgow District in the Tour of the North Stage race in Northern Ireland where I got the opportunity to race against (and get thrashed by) people like Doug Dailey, Keith Stacey, Johny Bettinson, Mick Holmes and Peter Buckley.

1971 and 1972 was a member of the winning team in the Southern Transvaal 4000m Team Pursuit Championships (best time was 4m49.5s) and was Southern Transvaal 20km Champion in 1972
In 1974 was Glasgow Wheelers Senior RR Champion and team-mate of Robert Millar.

Dropped out of cycling from 1975 until approx 1982 and took up climbing making the Scottish Mountaineering Journal with a number of 1st ever ascents mainly on frozen waterfalls!!

Was BCF Track secretary for the East Midlands for approx 10 years during the 1980’s/1990’s spending a lot of time trying to retain Harvey Hadden stadium in Nottingham as a cycling track but with a lack of commitment from the cycling community we failed spectacularly.